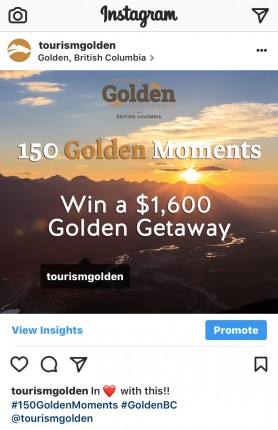 May 5, 2017, Golden, B.C.  Tourism Golden is thrilled to announce the launch of the ‘150 Golden Moments’ photo and video contest in celebration of Canada’s 150th anniversary.  Visitors are encouraged to post their favourite Golden, B.C. moment on Instagram for a chance to win the grand prize of a $1,600 four day/three night trip to Golden or one of 14 runner-up awards consisting of a Golden themed prize package.

“We are so impressed by the amazing pictures and videos that people share of Golden, B.C. and the stunning mountains that surround us; so much so that we started calling them ‘Golden Moments’,” says Andy Brown with Tourism Golden.  “We decided that this year would be the perfect occasion to share these moments with the public through our ‘150 Golden Moments’ contest.”

Visitors are encouraged to take a picture or brief video (maximum 30 seconds) in or around Golden, B.C. of their favourite Golden Moment. This includes the local national and provincial parks and can be an activity, viewpoint, event or person. They then post their picture or video to Instagram, follow Tourism Golden’s Instagram account, and include the hashtags #150GoldenMoments, #GoldenBC and @TourismGolden in the caption. Each month, Tourism Golden will choose the 15 best entries and post them on the Tourism Golden website. The last day to enter is February 28, 2018, after which Tourism Golden will choose their 15 favourites for the public to vote on.

The grand prize winner will receive a trip to Golden valued at $1,600.  The trip includes three nights’ accommodation at the Winston Lodge – including breakfast every morning and a $100 voucher for dinner, two tickets to Kicking Horse Mountain Resort (summer or winter) and complimentary lunch at Eagle’s Eye Restaurant, a $100 dinner voucher for the Island Restaurant, and a choice of one additional activity. The 14 runners-up will win a Golden themed prize pack that includes a bag filled with local goodies. Photos and videos will also be featured through Tourism Golden’s and their partners' social media channels and on the Tourism Golden website with photo credit given to the photographers/videographers. Full contest information available at http://www.tourismgolden.com/golden-moments

Situated in the Heart of the Parks, Golden is surrounded by six of Canada’s most spectacular national parks; Yoho, Glacier, Banff, Jasper, Kootenay and Mount Revelstoke.   Visitors from around the world looking for an authentic, unique mountain experience have an added incentive this year as Parks Canada is offering free admission to all national parks in celebration of the 150th anniversary of Canadian Confederation.