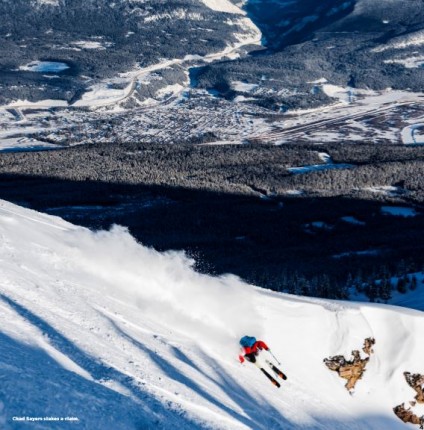 STANDING ATOP THE GONDOLA at Kicking Horse Mountain Resort on a bluebird day, taking in the alpine drama on offer—a 360-degree view of three mountain ranges, five national parks, and the sprawling town of Golden, B.C.—it’s hard to fathom how such magnificence was conjured from a small, local operation known as Whitetooth Ski Area. Yet hundreds of metres below, its handful of linear runs scratched from the forest as if by the claws of a grizzly, Whitetooth hummed along for decades before Dutch engineering firm Ballast Nedam, convinced of the upper mountain’s potential, opened Kicking Horse in 2001. They weren’t wrong: it immediately gained a reputation as a big mountain destination of note, prompting Resorts of the Canadian Rockies to bring it into their fold in 2011. Yet, despite ascending into the pantheon of global ski consciousness some 16 years ago, Golden remains humble and genuine, populated by guides, artists, parks employees, rail workers, forestry workers and a few ski bums escaping the growing crush of Banff and Whistler. One of the latter is ever-smiling big mountain slayer Dave Treadway, whose wife Tessa’s family provides him a second home in Golden. He’s joined fellow skier Chad Sayers, photographer Mattias Fredriksson and I on a tour of the area. And we’re starting here, at the top, from where everything Kicking Horse flows.