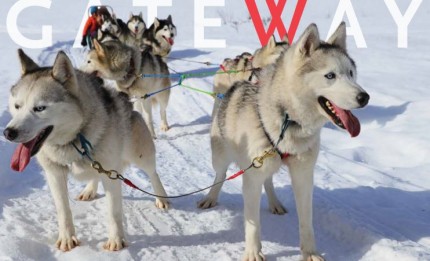 KONA IS NO damsel in distress. For starters, she’s a dog — a white Alaskan husky, to be exact. But the story of her rescue does carry a whiff of fairy tale (spoiler: it has a happy ending). Before Kona arrived in Golden, B.C., to trot off into her snowy sunset, she was in a rough spot in Saskatchewan. (The details aren’t entirely clear but indicate she was neglected by an ill-equipped dogsledder stretched too thin.) She was saved from that life by her current musher-cum-Prince Charming, Matt Parr.

When I first meet Kona and Parr, they’re snuggled on a couch next to a crackling potbelly stove, Kona gazing into the blue eyes of the man who’s devoted his life to saving pups in similar positions. Over the past 11 years, Parr has rescued some 50 dogs. He has trained and successfully found homes for most of them with nearby farms and families. But 14 of those dogs now run for Parr’s Golden Dog Sled Adventures, the touring business he launched in 2013 in the town best known for skiing, snowboarding and snowmobiling.